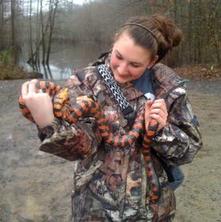 ​Kayla received her BS from University of Tennessee Martin in 2012, a MS from University of Texas Tyler in 2015 and began her Ph.D. research in Fall 2015. Kayla's interests broadly involve landscape ecology conservation and management. Her project is part of a long term mussel conservation program in Missouri working with Missouri Department of Conservation. Her focus is conducting a conservation assessment and developing a long term monitoring program for mussel assemblages in the Meramec River Basin. In her "spare" time, she likes to go hiking with her pup, Pepper.  EMAIL 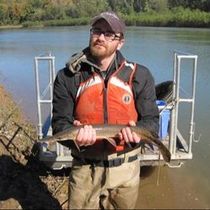 Rory Mott is a third year masters student working with Amanda Rosenberger on native stream fish. Currently, Rory is studying the water quality tolerances and preferences of the endangered Topeka Shiner.  He is interested in thermal preferences, acclimation potential, hypoxia tolerance, and response to salt and nitrogenous wastes.  His project involved quite a bit of animal husbandry in addition to construction and maintenance of a specialized swim tube and a set-up to obtain behavioral data of Topeka shiners exposed to hypoxic conditions.  In his spare time, he enjoys running with his dog, David Bowie, swimming, and playing the violin.  EMAIL
Matt Schrum
M.S. Student 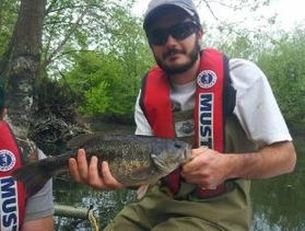 Hailing from Bismarck in southeast Missouri, Matt graduated from the University of Missouri with a B.S. in Fisheries and Wildlife Sciences.  He has formerly worked for the Missouri Department of Natural Resources as a state park naturalist, and the Missouri Department of Conservation conducting surveys of threatened benthic stream animals including freshwater mussels, darters, and madtom catfishes. Matt’s project focuses on development of standardized sampling protocols for assessing freshwater mussel populations.  Matt is also working on a second project that is providing a water quality profile of the Little Black River system to determine potential causes for mussel declines and to identify sites for mitigation and reintroduction. Matt enjoys biking with his energetic little dog, Cody, growing orchids, keeping and catching snakes, and the outdoors.   EMAIL 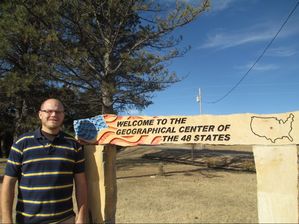 Garth Lindner received a BA from Indiana University, a MS from Indiana University from the Department of Geography, and a PhD from UMBC from the Department of Geography and Environmental Systems.  His research focuses on understanding the movement of water and sediment over the landscape and through river channels, ultimately connecting these processes to biotic endpoints. Garth is currently a Post-doctoral Research Fellow. For this project, he is deriving hydro-geomorphic variables from remotely sensed data sources at spatio-temporal scales relevant to diverse freshwater mussel beds in the Meramec River watershed to be used as input into mussel habitat suitability models.  Garth spends every moment he can with his family, including his wife, Brooke and daughter, Ella.  The family is expecting a new addition soon!    EMAIL
Jordan N. Hotswarth
Undergraduate Researcher and Technician 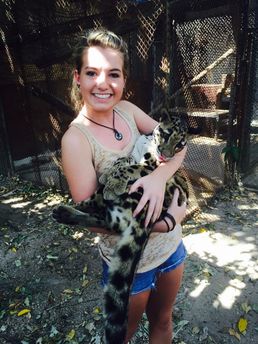 Jordan N. Holtswarth began as a freshwater research technician position under the supervision of Amanda Rosenberger and Kayla Key in Spring of 2017. Her work will be to help Kayla on her M.S. research by sampling and identifying freshwater mussels in the field and modeling the extent of their range in ArcGIS.   In her spare time, she enjoys spending time with her sweetheart, Jake, and experiencing the Mizzou life.  ﻿EMAIL
﻿

PAST STUDENTS, POSTDOCTORAL RESEARCHERS, AND STAFF